22 John Street, St.Albans Melbourne
Free shipping on all orders over $100, simply select the free option at checkout. We wish the best of health and safety to everyone, and thank you sincerely for your continued support.

How to paint a bike.

How to paint a bike.

Over the past year, I’ve gone a bit ham on bicycles. I almost have the same number of bicycles as I do fingers, so sooner or later I would have the opportunity to expand my workshop skills. Take a bike apart? Easy. Clean it up? Dunk it in your cleaner of choice. Put it back together and adjust it so it runs smooth? Done.

Repainting a frame? This is new…

A few weeks ago, I bought a track frame that arrived with a somewhat tired looking maroon paintjob. It was rough in various places and just looked dull: 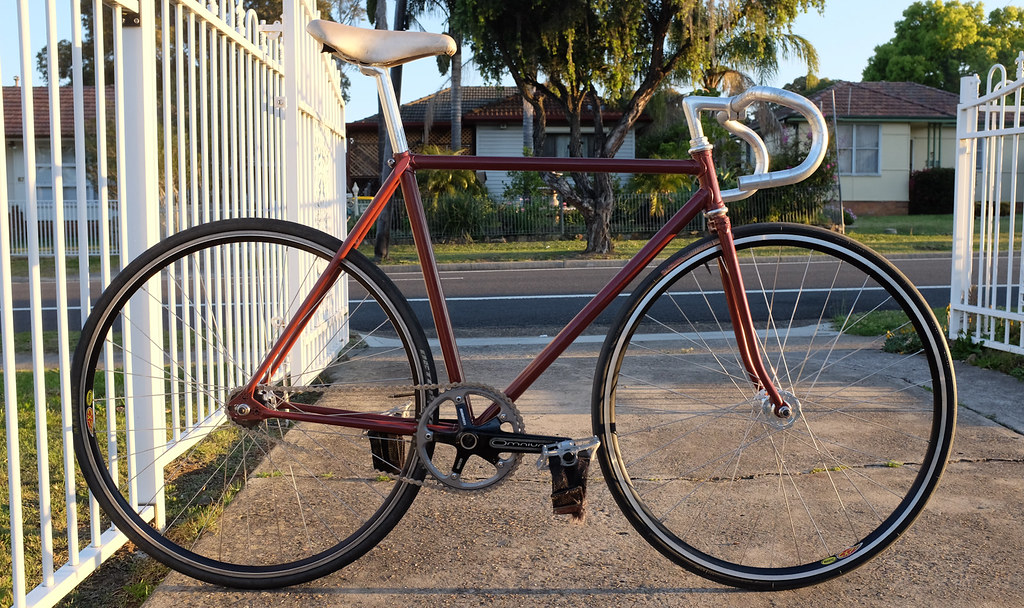 So after a few weeks of procrastination, I finally got around to stripping the frame of its paint. I sanded the paint, then dabbed on paint stripper. The sanding helps the stripper to penetrate the paint, really getting it bubbly and blistered. The bubbled paint was then scrapped off. This probably took two afternoons as the paint was not consistently applied.

After the frame was bare, the first layer of prep was applied. Etch primer, to my understanding, helps additional layers of paint adhere to the surface better because it’s porous once dry. Porous surface = holds more paint. It was my first time using this sort of product, and within an hour I had somehow used up an entire 350g can of the stuff. My brother who has a bit more experience than me when it comes to painting frames said that I probably did not need to use that much. Whoops…

Next was filler primer. Why another layer of primer? The frame had been previously sandblasted, leaving a fairly rough surface. This would mean if I sprayed paint over the etch primer, once dry the surface would still be rough. So, as the name suggests, filler primer is a type of primer that results in a smooth surface (once sanded with fine sandpaper) and in turn allows nice coverage of paint.

Again, I used a whole can of primer. Spray cans are hard to use. All respect to the writers and artists out there.

All about that smooth surface..

After some amount of sanding, the frame was ready for a lick of paint. Deciding it was not worthwhile to slave away on paint choices, I settled on a “Passionate Blue” by Dulux. Revising my spraying technique, I went light coats over the frame. Things got painted, sure, but the next problem was that it was not drying with a smooth glossy finish as advertised. Must be the nozzle type or the thickness of the paint of something – does somebody know? Anyway, despite the frame getting completely painted, it needed additional coats to attain a smooth finish. This resulted in me having to purchase another can of Passionate Blue. The next challenge was having to spray on the paint thicker to get the glossy finish, without making it run. Hard stuff! My brother helped out with the fork and it looks great, but the frame took a bit more time.

So, how much did this little project cost me?

I could have paid about $20 more for an auto shop to do a sandblast and powdercoat with somewhat more reliable results (at the cost of a less smooth finish), but obviously I would not have learned a new skill. Appreciate.

Next time, I’ll feature the frame built up into my new track bike!

Leave a reply Click here to cancel the reply